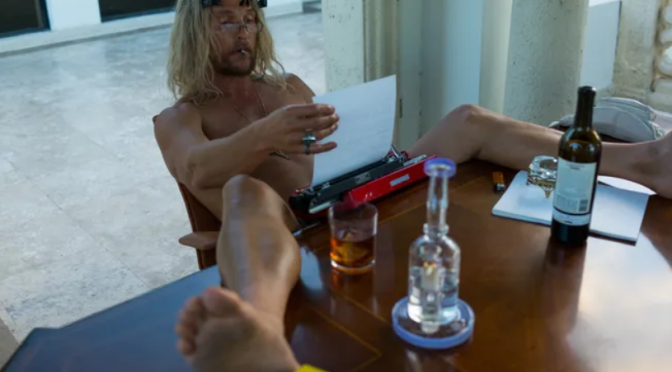 There are no spoilers in this rant. However, I will spoil it by saying it’s not worth your time and chances are, if you are of any discerning taste, you will be disappointed if you watch The Beach Bum. One could argue I am spoiling you by saving you the trouble of a poor experience.

I was actually pretty bummed when I missed an opportunity to watch Harmony Korine’s latest feature, The Beach Bum, at the Ritz theater where it was showing, not impossibly far from me. Can someone please tell me what the hell I was thinking? Having streamed it a couple of months ago, I’m sitting here on my couch in my well-appointed (read as adequate) living room around 4:20 in the afternoon when I’m often wont to think about such things as Matthew McConaughey, and I’m feeling the sting of disappointment again as if I had just watched it. Funny how that happens. When it does, I write.

Now, I don’t normally feel compelled to write bad reviews. I realize you can make a career out of being that surly, critical, over egotistical professional critic who gets paid lots of money to shit all over people’s projects in a snarky and entertaining way, but that’s not my goal in life. I’m fine not being Bill Wine. This is a rant.

When it comes to Harmony’s latest film, I write not only in vitriol but out of plain old-fashioned disappointment. I mean, in audience hierarchy, I’m probably second generation, having not seen Korine’s 1995 cult classic debut film Kids until 1999 at the age of 22. It made an indelible impression on me artistically and emotionally. I didn’t even take note of Korine’s name at the time. I just knew the film resonated with me in many ways, difficult to explain even now. I see that as a testament to its merit. It was reality tv before the age of reality tv, in my opinion. Even though it was scripted, the actors had no previous acting experience and were drawn directly from the film’s setting: New York City. It was raw, gritty, and it was a film style I had never really seen before, except perhaps in Italian Neo-realism. But the subject matter of those old subtitled black and white films from my college film class didn’t engage me much. So you can imagine why after seeing The Beach Bum, might be disappointed in a guy who, in his own words, said “give me something I haven’t seen before in a way I haven’t seen it” in a 2013 interview when asked his advice to aspiring filmmakers. I loved that interview, and I know many of his core fans like me must have too. He gave us that back in 1999. And now he gives us this?

Make no mistake, I am well aware Harmony’s journey through the gauntlet of critically-acclaimed Hollywood success from the tender age of 18 has not been an easy one, by any means. One need only watch this video of his David Letterman Show antics to see we’re talking about an affected man, gifted as he may be in the art of cinema. And perhaps that edginess, the brushes with the law and gratuitous “artist with an addiction” archetype was part of his appeal. But after sitting through The Beach Bum, I think I speak for a lot of fans of his early work when I ask: what happened to you, man?

I get it, you did a lot of drugs, perhaps made some business decisions you regret and had to make a McConaughey movie. It could happen to anyone. Maybe you had to agree to cast certain celebrities, or endorse products, whatever you have to do when you sign a deal with the Hollywood devils. But could you at least have made it look like you put up some kind of fight? It seemed to me, and feel free to disagree with me here, that I was watching a bunch of 2020 Hollywood whores dig up the corpse of 1999 Harmony Korine and parading it around to see how much they could profit off of his name. And the quintessential Hollywood whore, what’s his name… used to be a heavy-set guy they shoved in our face too much, now he’s thin but still nobody cares? Oh yeah, Jonah Hill… Really? Did he have to be in it at all, let alone that much? And that accent? My ex-girlfriend couldn’t do accents to save her life, and even she could pull off a Southern drawl better than Foghorn-Leghorn Hill did in that film. Couldn’t they have just cut him a check for doing nothing just so we wouldn’t have to actually see him? He should be embarrassed by his “performance.” Then again, there was Snoop Dogg. Who doesn’t like Snoop?

But maybe that was the point. To embarrass Harmony Korine. Because to a true fan of films like Korine’s 1997 film Gummo, it felt like The Beach Bum was a coup. A plot to exhibit the nepotistic imperialist power of a bunch of vacuous 2020 celebrities to dig up a cult classic director from the 90’s and eviscerate his image as a groundbreaking genius in the eyes of his early fans. Who are, as it happens, older people. Maybe it’s a generational “fuck you.” I don’t mean that so much as one generation aiming at another, but rather the target market (and it’s all about revenue) has shifted away from me as I’ve gotten older. As if the Hollywood machine is saying “Sorry man, we’ve moved on. And sad as it may be, this is what younger audiences want. More McConaughey.” Oh, but War Dogs, yeah… brilliant film-making, Jonah. I’m sure that will be a Criterion Classic someday. I don’t know who is more at fault here, Korine or the people he was (hopefully) beholden to on this project, but it really doesn’t matter. Your core audience shouldn’t have to ask such questions.